As I mentioned in the colourscript post Stefano originally came onto Ledge End to work on the colourscript and then stayed on to do layouts and backgrounds which was supposed to be for 6weeks.... but instead Stefano ended up staying on the project for 6months! Creating somewhere in the region of 96 original backgrounds for the film.

I had very clear ideas of what I wanted going into the film, of how the backgrounds would be designed to be part of the visual storytelling. But working with Stefano brought a sense of painterly texture and subtlety i couldn't have imagined. Though alot of the crew members on Phil worked remotely in other parts of Europe Stefano was sitting beside me throughout the production, which meant we came to understand each others strengths and weaknesses and evolved the storytelling style within the artwork intuitively.

Depth of field was something that had been crucial in the script stage in how I wanted to reflect Phil's inner story. As we started to push the style of the backgrounds we expanded our explorations from the colourscript (our using a painterly approach to mimic the effects of live action lenses and focus) to a painterly style based that collapsed the interior depth crushing the office into a flatpack, and expanded the outside world into daring vibrant landscapes.

We worked alot with the idea of "eye protein" (a term im stealing from guillermo del toro) if "eye candy" is beautiful things happening on screen with no real depth or input to the story "eye protein" is trying using all of the elements within the frame to reinforce what you're trying to tell the audience. The characters surroundings reflecting his inner emotional life. 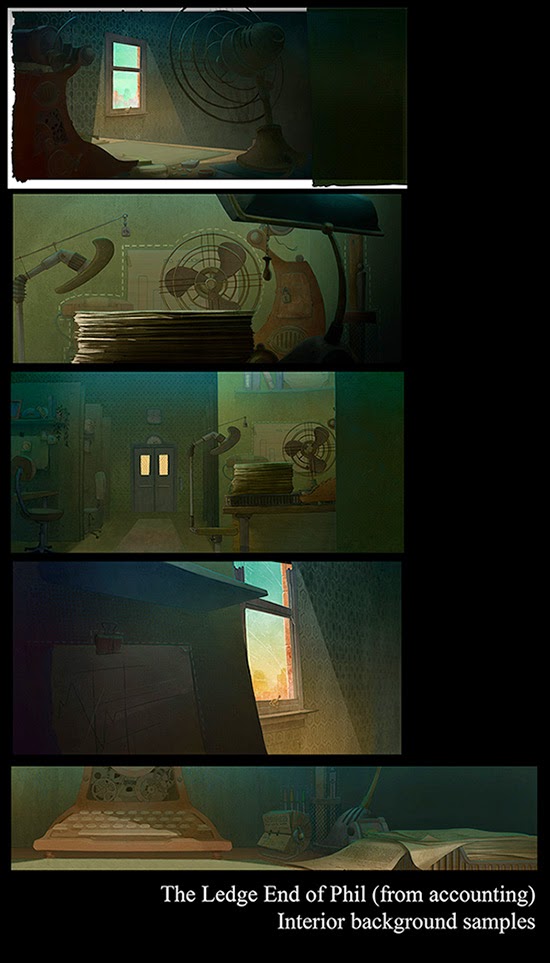 Stefano's input to the film is immeasurable, the backgrounds went from what could have been pretty backdrops to beautiful animation to being cinematographic elements inherent to the films storytelling.

You can check out more of his great work on his website here: Stefano Scapolan
Posted by Paul O Muiris at 09:42