So while Phil was the embodiment of awkward tension i knew from the beginning the gull needed to be a simple concise shape. In my head i saw him as a plush toy you could squash and pull at but he always bounces back. He is the ray of sunshine inside the office while phil is a stain on the vibrant outside world (I'll talk more about this when we come to colour keys)

One thing that came up though was the more simple he became the less like a seagull he looked... But in terms of his character it was his shape in contrast to phil and his surroundings that were important to me. The closer to a seagull he became the more gangly/phil-like he would become, and the less we could stretch his expressions and reactions. Also you'd be surprised how much the colouration helps identify him as a seagull.

In the very first draft of the story the bird was actually a pigeon, but having grown up on the coast I've probably seen a lot more seagulls in my life but more importantly as a bird the seagull embodies the concept of freedom more easily. The idea of soaring free over open oceans. There was a version of the script where Phil could see the open sea beyond the cityscape. Though it didn't end up in the film, I thought the seagulls helped hint at it. Where as pigeons can be funny but they still basically come off as rats with wings. 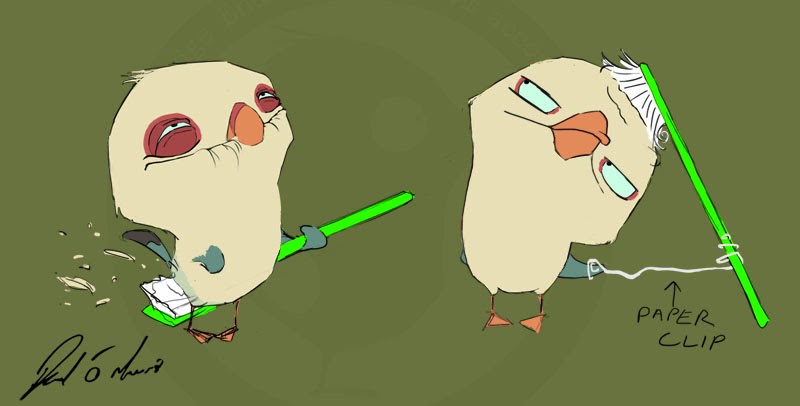 One thing that's worth mentioning here is that when i showed the finished character designs to the heads here at Cartoon Saloon, Phil's design especially, they said they wouldn't work. They wanted me to bring in another designer to create simpler character designs for the film. 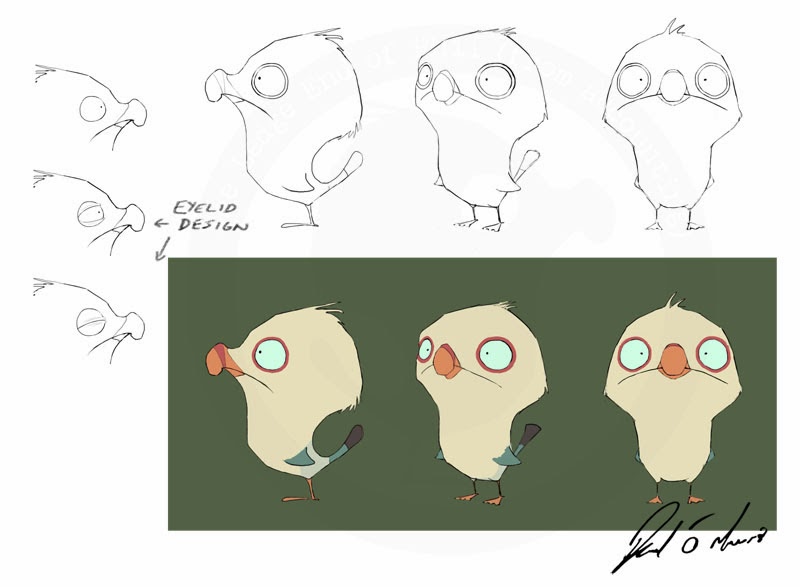 Their worry, which made perfect sense considering our budget and tight schedule, was that the characters would be too awkward to animate, and more importantly the designs had too much "line mileage"; In 2D animation you're generally drawing 12 drawings per one second of animation. The more complicated a design, the more lines you use to describe a surface the longer it takes to draw. There are also more elements to track in terms of motion, and the more complicated the character becomes to animate.

But i had designed the characters to my style for the specific reason that Phil has a physicality that i didn't feel a simpler character could portray. Details like the creases in his knuckles were important so you could feel the pressure of his hands on the wall, or when he touches the glass of the window. We see the wind blow through his hair and his shirt reminding us how easily he could be blown off the ledge. For me those elements were important for the film as constant reminders to the audience that he is physically there and in danger. That if he fell he would die. Luckily for me the Saloon trusted my ignorance as i made the decision to go ahead with the designs as they were. 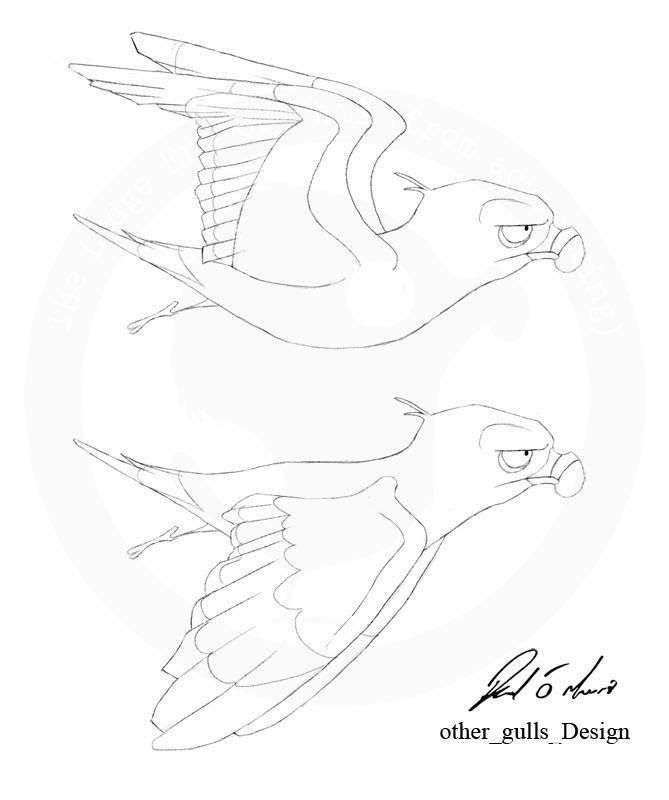 It helped that i told them I knew I could make the animation work because i'd just found the perfect animator for Phil, now all i had to do was to get him on board... But that comes later, in the next post it's storyboard time!
Posted by Paul O Muiris at 09:17 2 comments:

Hi folks so The Ledge End of Phil (from accounting) has been selected to screen at the Dingle International Film Festival on March 15th St Patricks Day weekend! 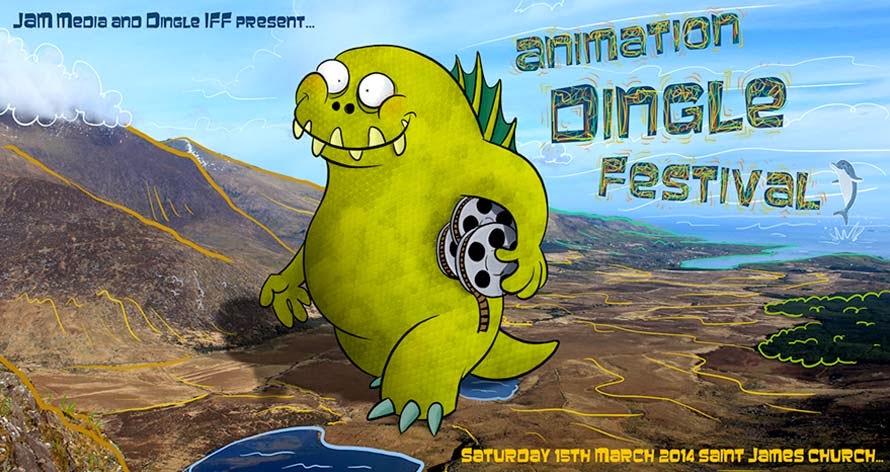 Tomm Moore Director of The Secret of Kells will also be at the festival on the 15th giving a talk on the process involved in creating Cartoon Saloons new animated feature film SONG OF THE SEA as part of collaboration between studios across five different countries.

Click on the image to check out the schedule and grab some last minute tickets!

For the early character design on Phil i went back to pencils and pantones for the artwork, I felt it needed to be stripped back a little, mainly to be without the constant saviour of ctrl Z! It was nice to make mistakes that didn't just disappear

As we moved into the more finalised artwork for the model sheets i switched to photoshop but tried to keep the broken feel to the line and a more sculptural approach with the flat shapes. This was an early concept for Phil where I was trying to figure out what kind of shape he was in 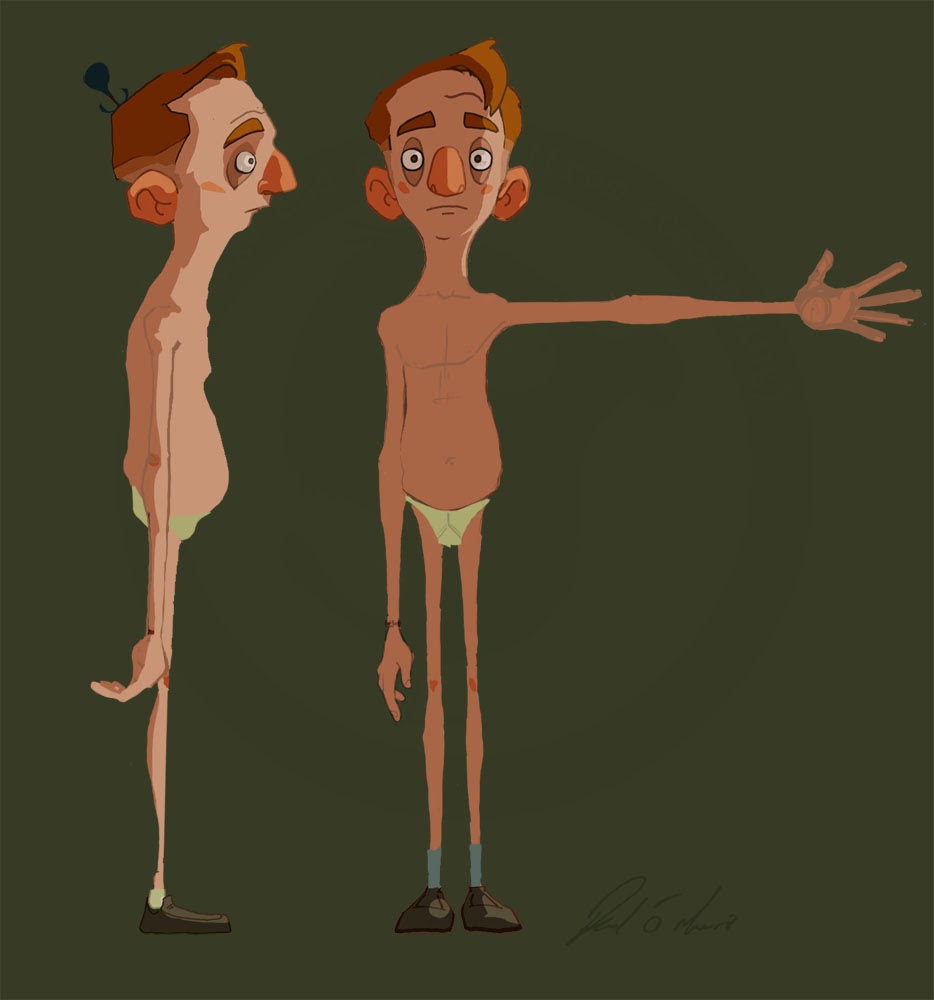 In the script Phil holds himself in such a careful way you feel if he fell over he'd shatter. His clothes restrict his movement. His back is hunched from labouring over a typewriter all day. His movement would normally be small and careful and i wanted the design to reflect it. I knew it would eventually come through in his acting, but what i wanted was immediate response. It is the key element animation holds over live action, our ability to visually caricature and exaggerate far beyond the real without it drawing attention to itself as fake. 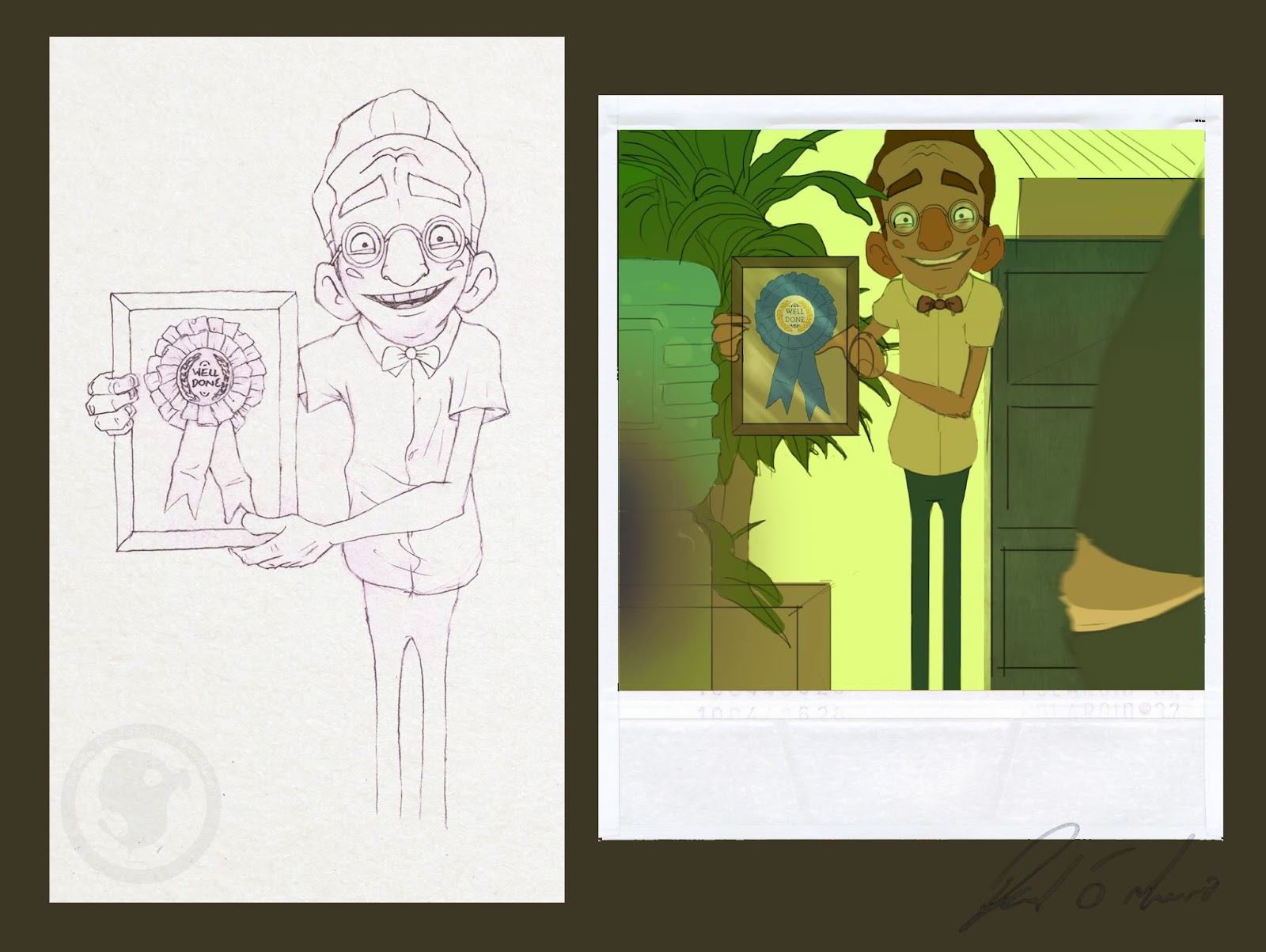 Here you can see an early concept for the photo on Phil's desk. I thought it would be funny if his most prized possession was a picture of himself with an award for his hard work. Someones finger's over the lens, some guys walking past with his ass hanging out. Phil's shoved into the corner. He has shoe horned himself into his own uncomfortable life. 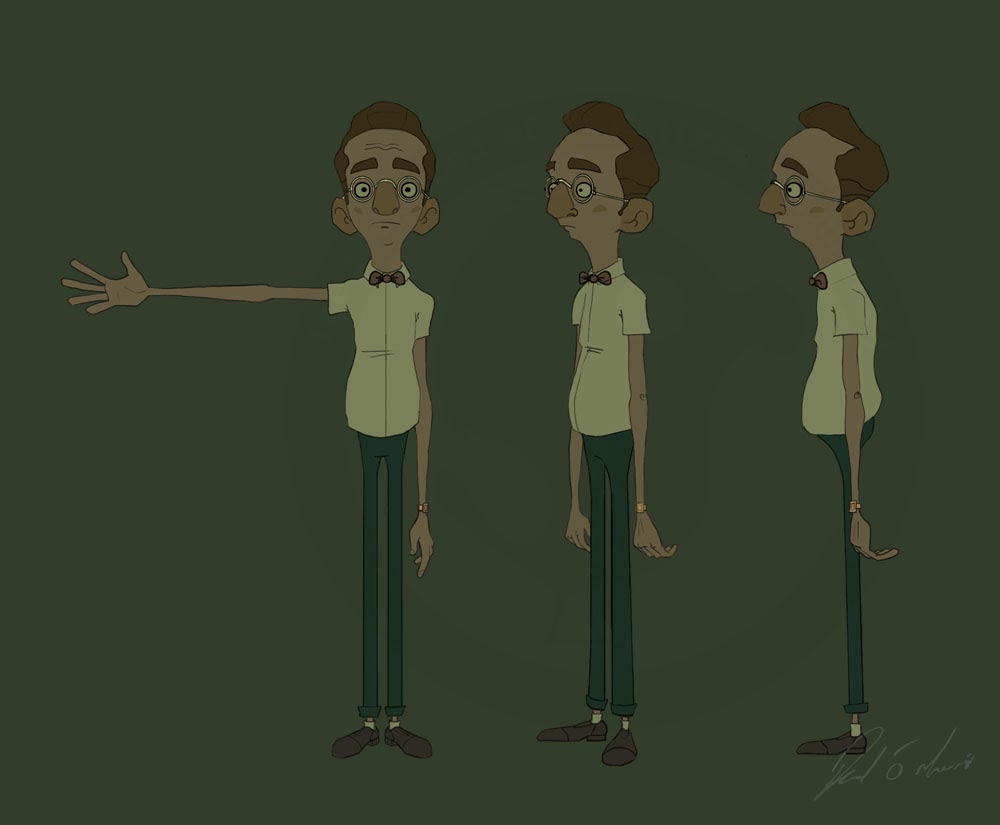 It was important to show that the other people in his office where not drones like Phil. They are brightly coloured, more dynamically shaped. It helps us to realise that Phil is not a worker bee, his dreary life is self imposed, and it is up to him to change it. These characters play a part later in the film also... 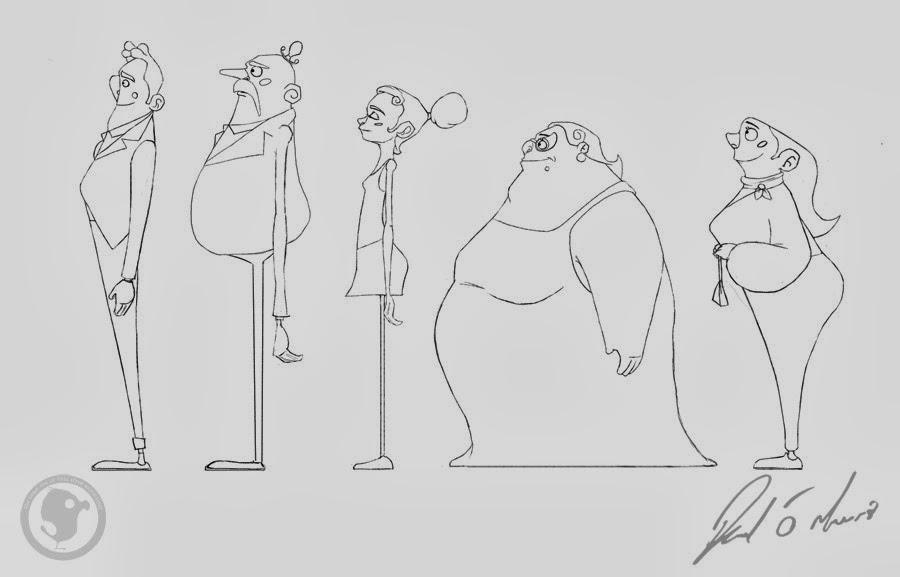 As the film is about two contrasting worlds it made sense to push Phil outside of his comfort zone when he ventures outside. So when he gets into the vibrancy of the exterior world his new palette is overwhelmed by colour

In the next post I'll be putting up the character design artwork for the seagull, Phil's polar opposite!
Posted by Paul O Muiris at 10:20 No comments:

Hey folks so because I'm at the Jameson Dublin International Film Festival screening Ledge End today I won't have time to delve into more concept art just yet, instead i thought it might be nice to show some of the animated short films that inspire me. Some of you may have seen these before others maybe not, but either way these are all beautiful films that deserve whatever platform they can get to be shown! Enjoy and i'll see you all next week!


Overtime from ouryatlan on Vimeo.


El Empleo / The Employment from opusBou on Vimeo.

And I even found the making of which i'd never seen before!

Making of El Empleo from opusBou on Vimeo.

Email ThisBlogThis!Share to TwitterShare to FacebookShare to Pinterest
Labels: Inspiration

Now that we finally had the funding in place we could start to gather our motley crew, and Miki Montlló was first on the list. 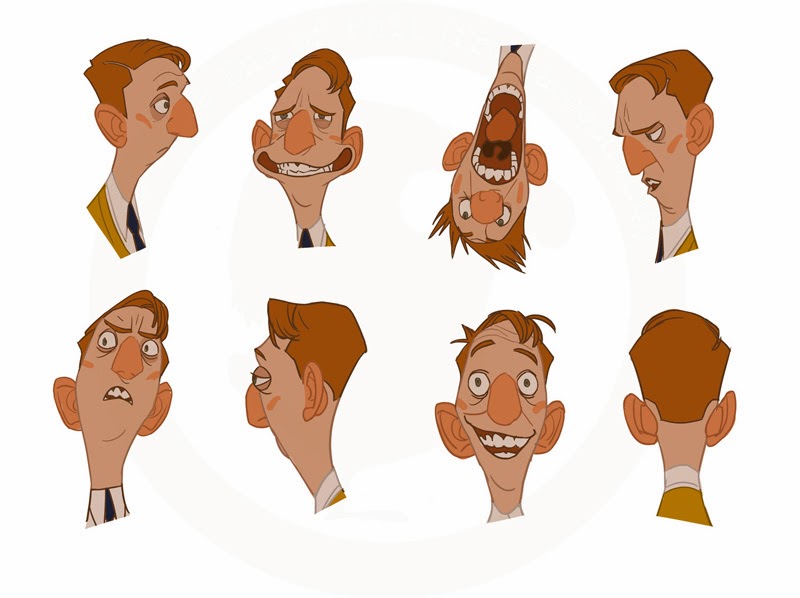 As i said from the start this blog is as much about the crew who made the film as it is about the making of the film itself, so rather than explaining the thought process behind the design of the characters just yet, in this post I want to concentrate just on Miki's contribution to the film. 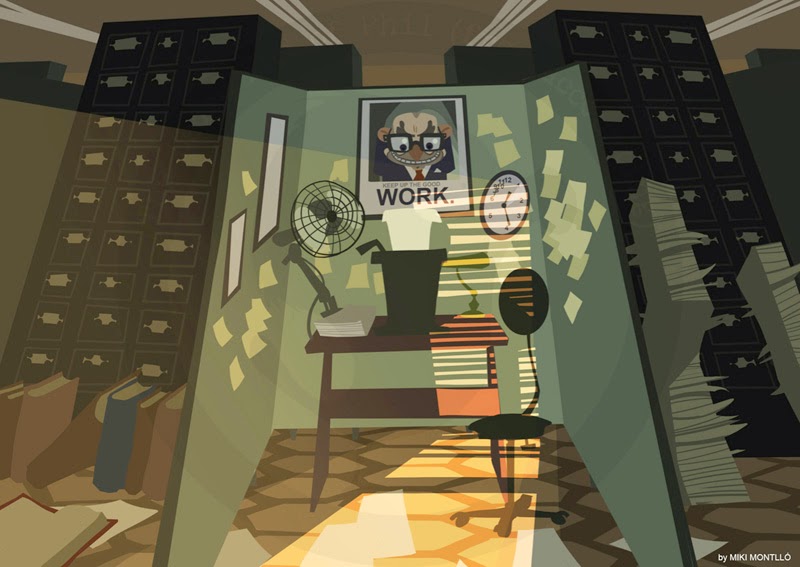 As you'll remember from post 01 Miki created some of the original pitch artwork for Phil while we were working together in Cartoon Saloon, long before the film was ever funded. 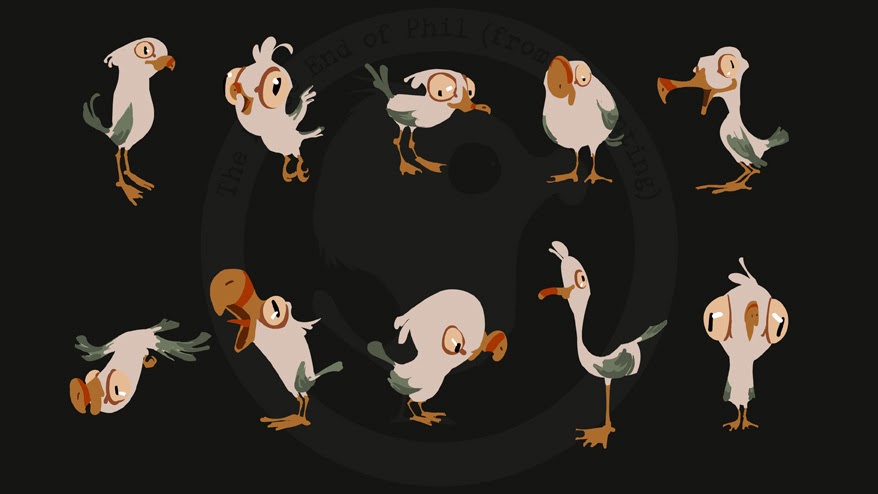 So for the first month of pre-production I moved into Miki's studio in Dublin. He was working on the first volume of his comic "Warship Jolly Roger" while I worked on some sculpts and designs for the film.

Miki was a slightly different case than the rest of the crew in that I knew I wanted him to work on the film from very early on, and after spending months listening to me talking about the story and inspirations over beers his short time on the film was more informed coming into it than alot of the other crew. 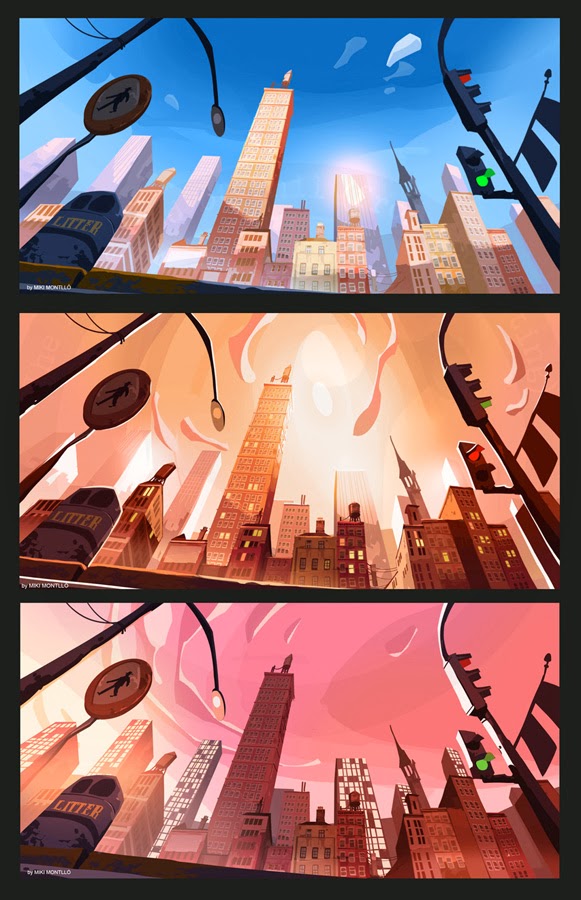 Even though Miki was only able to take one week off the comic to work on the film you can see he did some great artwork ranging from the two main characters to the environments. 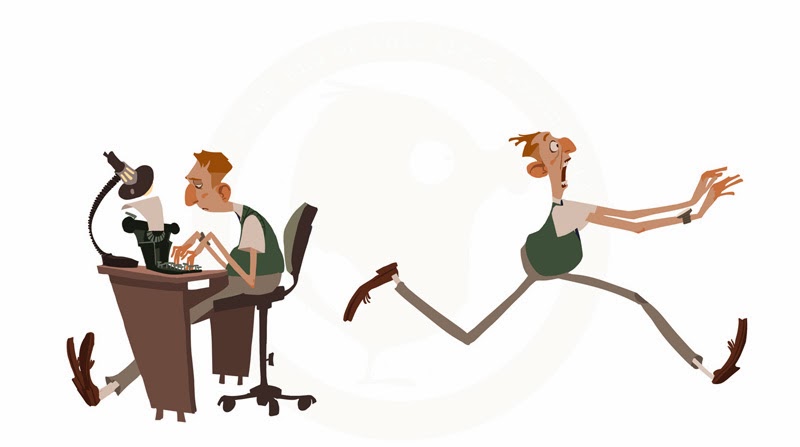 The fact that it was just the two of us in the studio and we had a very short time frame also meant that we could concentrate on getting as much out of that one week as possible. It forced us to boil down our decisions to what we wanted to see from the script and quickly brought up issues in the visual storytelling i knew needed to be stronger and also things that people expected from the visual storytelling that i wasn't interested in showing. 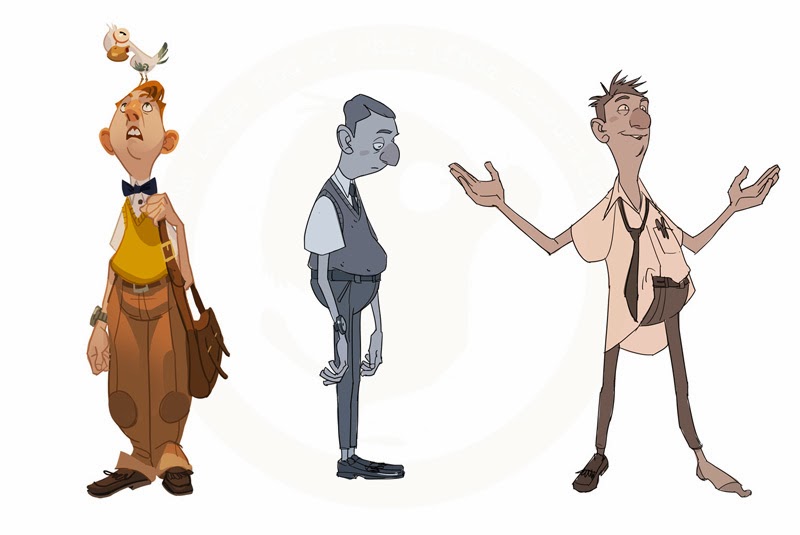 In the next post I'll be talking more about my exploration into the characters during the design process!

And to see more of Miki's artwork and his comic you can check out his facebook page here:


Miki Montlló
Posted by Paul O Muiris at 10:27 No comments: