Next up is artist Stefano Scapolan!

Stefano originally came onto Ledge End for a month to work on the colourscript and backgrounds, but instead ended up staying on as my right hand man for the rest of the film! 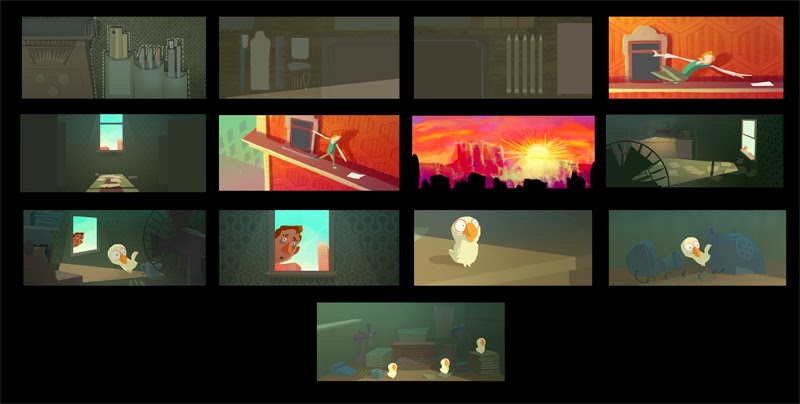 Oddly enough planning the colourscript felt closer to working with the music for the film than to the storyboarding. It came down to harmony, rhythm, contrast and flow. I had already collected a lot of reference material which i gave to Stefano along with some bits and pieces i'd been working on myself.

I knew from the script stage that colour would be key in strengthening the contrast between the interior and exterior worlds. But within each sequence the colour always needed to be driving the emotion of the film. Above are some of the early panels Stefano painted where we explored the interior vs exterior worlds. Though many of these shots were eventually cut they were crucial in helping us understand what the film needed.

This sequence with the gull drinking coffee (above) had been something myself and Dan worked on that didn't make it into the film. But you can see here Stefano and myself were exploring how stylised the colour use could be. Luckily unlike many of the other crew on the film Stefano was working with me in the studio so we were able to work on the colourscript in a more intuitive way passing files back and forth strengthening each others panels. 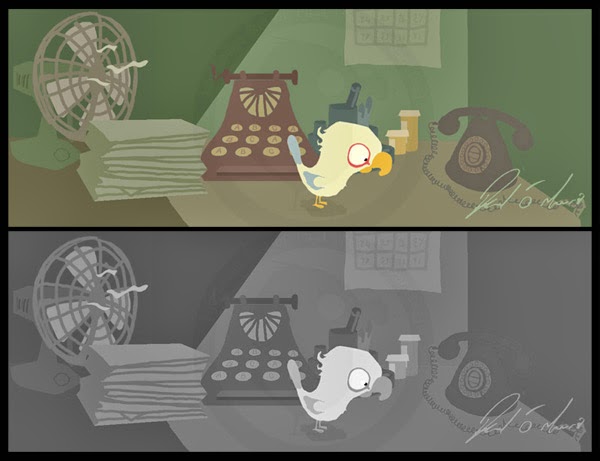 Depth of field was an important element in the film. I wanted to emulate the focal length of live action lenses through our colour design so that it was inherent to the world itself rather than through post-production trickery. An important element of this was that we worked on the shots monochromatically to define depth in terms of tone. As you can see i was playing with in one of my early concepts (above) and with my concepts below.

During his time on the film Stefano drew the layouts, handled final prop design and painted all of the backgrounds you see in the finished film. So we'll be talking about him again here pretty soon!

Next week we get to ANIMATION! Where i'll be posting some of the early linetests